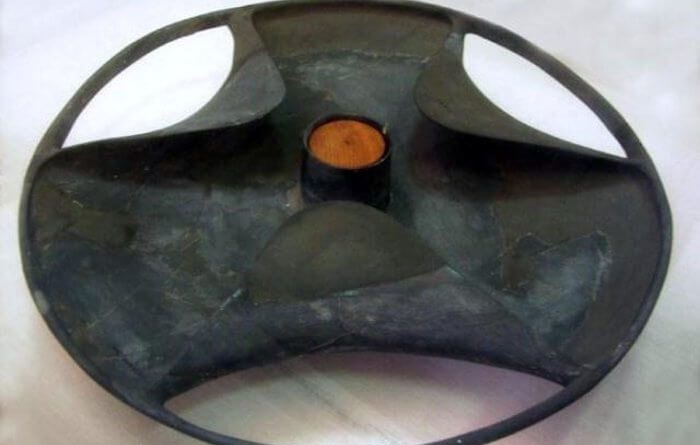 This mysterious ancient relic was discovered in 1936 by British archaeologist Walter Bryan Emery in the tomb of Sabu (around 3100-3000 BC), Pharaoh Anedjib’s child. Sabu’s father was the fifth ruler of the first dynasty of Ancient Egypt. Beside the disc, also some stone blades, arrows, a couple of copper objects, and some schist parts were found in the tomb.

The size of the Sabu Disk is 61 cm X 10 cm. It is made from a rather delicate material, called metasiltstone. It would be difficult to bend this material without breaking it even with the technology we have nowadays.

The researchers are wondering what it was used for. It is unexplainable how could it be made 5000 years ago since the people did not have the technology to process this material and it is still a mystery why the Egyptians put so much effort making it.

There is a theory that the Sabu disc is an instrument of megalithic energy used by the people over 5000 years ago.

How does it function?

Megalithic energy depends on volume resonators which are an oscillating system that lose very little energy. The constructors of the ancient megaliths understood it as the volume of a specific substance, with specific physicochemical properties. The dimensions and the form of the resonator were in line with the elastic acoustic wave.

This is a very simple instrument, familiar as a passive emitter. For example, if you place a mobile phone in a resonator, its sound would be heard in a great distance.

The Sabu Disk has three lobes. That is the reason why the energy modules of the wave, transmitted from the lobes, makes three antiphase modules in the disc. Energy waves interrelate with the galactic microwave background of the space, and by means of particular reverberation from the substance’s (water) physicochemical features, the entire procedure makes more energy in the apparatus.

The Sabu bowl pumps reverberation wave energy in the physicochemical features of Si-O bonds in silicon. It is a proof of how naturally existing processes can make megalithic energy. The element used in it is water.